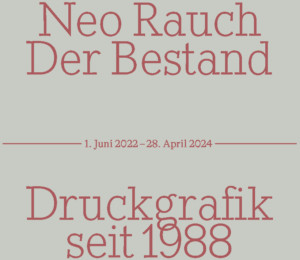 On June 1st, 2012, the Graphics Foundation Neo Rauch presented an exhibition with selection of graphic works by Leipzig-based artist Neo Rauch for the first time. In 2022, we celebrate the tenth anniversary with a very special show NEO RAUCH THE HOLDINGS Prints since 1988. For the first time, the artist’s prints from 1988 to 2022 are presented to the public in a comprehensive show. The exhibition includes 150 lithographs, etchings and silkscreens, which show the development of his visual languages as well as the techniques used in the graphic oeuvre in a fascinating way.

To mark the tenth anniversary, the foundation publishes a high-quality catalog of the artist’s graphic work from 1988 to 2022 at the publishing house E. A. Seemann Verlag that is available at a special price at the Graphic Arts Foundation:

We would like to thank the Ostdeutsche Sparkassenstiftung in collaboration with the Salzlandsparkasse for their support of the jubilee exhibition and the catalog.

Wolfgang Büscher
Speech for the opening of “The Inventory/What Endures” in Aschersleben on June 1, 2022

Dear Neo,
Time passes. Ten years ago to the day, we stood here for the beginning of what now thrives so profusely. The name of this overall view of your graphic oeuvre is  “Der Bestand”, in “The Inventory” or “What Endures”, and this can be understood quite soberly as just that: what has come to be in the course of time. We can understand it as a celebration of what endures. What endures? Something that does not melt away or lose itself chasing a will-o’.thewisp in all directions. For a playful, open understanding of art, that may sound somewhat hostile to art. But a lack of playfulness, of pleasure in drifting, dream, and dream figures –  no one can really impute that to Neo Rauch. The question of what endures is: does a work have a pole of strength? A breath, a pulse, that something all its own that one doesn’t always know how to capture in words; one stands before it. But you can feel that it’s there. It casts a spell over you. What I find so fascinating when I peruse these pictures from an unbelievable five decades is precisely that. We see a life in all its fullness, that of the artist, but even more fascinating: his art. Your graphic art was different in its beginnings, but everything that defines you was already there. It just took time to reveal itself. Neo, you yourself say that your beginnings were a search for an artistic path of your own that fit you. You said that you tried some things out and then rejected and abandoned them. Yes, the artist himself may remember it that way. As a viewer, I have the privilege of not having these memories of taking part in the young artist’s inner struggles. I simply take a look at it, precisely the beginnings, and stand astonished before an oeuvre that bears traces of a story of creation, a story turned into a puzzle – a riddle that then solves itself.

– 1988, a time endlessly distant from our time today. “Fish” was a very early  picture from this year. A head, black-and-white, half of a human face. Something here wants to come into the world and take form. From the same year, a person, a whole one now, but he apparently comes with the time into which he wants to come out, should come out, namely into measured time, into time that exceeds its measure. He doesn’t seem to   manage with this time. As if fettered, he floats in its cables or ganglia.

– Then, a year later, in the magical year 1989, a portfolio: “The Journey”. Once again, a veiled figure, an unborn little human whose unfurling into life doesn’t
quite work. “Fluglahm”, “Flight Lame”, is the picture’s title. But then there is: “Sun in the Blood” – a detonation of life. And then “Flight” – see, it does work,
thing find themselves in flight, floating. The paralysis of flight, the weight of the earth is shed. The picture reminds me of a dream in which I could fly. It wasn’t
hard at all, I just had to keep repeating a very simple motion with my whole body, and I flew. I couldn’t believe how easy it was. But still unaccustomed;  I flew awkwardly, inelegantly – but I flew.

– In 1990, Neo goes to Hamburg, “Footsore”, as his picture is titled. Thirteen pictures by 13 artists from East Germany arrive there, “from what is STILL the
other republic”, as we read on the exhibition poster, somewhat puzzled. In the same year, Neo is “underway” – so the title – to Linz, Austria.

– Then the two solitary works in the oeuvre, “Ernst R.” and “Horst W.” Two arch- German names, two heads in black-and-white. Ernst R. has something closed off, blockaded about him; Horst W. something pupated or embryonic. Anyone who has awaited the birth of a child can recognize in the picture the embryonic
figure he or she is familiar with from ultrasound images.

– Then everything explodes. In the 1990s, the things, situations, and figures step out of the embryonic process. And there was color. Another personal
association, but this time not a dream, at any rate not a nocturnal one. As a child, I sat in front of a black-and-white West German television set and
watched as this man with the receding hairline pressed a large, dark button – and it turned red. The button, not the man. The television screen, a moment
ago still black-and-white, turned colorful. This was the second when color TV began, and I can say I was there on the scene. The man with the receding
hairline was Willy Brandt.

– Astonished similarly to the boy I was back then when he stood before this transformation, I now stand astonished before this oeuvre, this path, and its
inner logic. And this astonishment is deepest when I look at the beginnings. Because already in them is the spirit of your mature oeuvre.

– Our talks often revolved around margins. The outskirts of cities, the limits of the reasonable, absolutely explicable, almost machine-like doings and goingson
of human beings. The fringes of being awake. The zones in which things blur, in which dream and reality touch each other, in which one know longer
knows what these figures who inhabit this zone are precisely doing, actually? These workers, for example, that we saw on our walks around Aschersleben,
who stood around, seemingly purposelessly, in front of their quiet factory – is this merely a smoking break, or have they fallen out of a time, a state in which
they once did comprehensible, expectable things?

– I see all of this already in your beginnings. Well, the artist need not chase willo’- the-wisps just like his figure. And he shouldn’t. As ringmaster, he should
have the arena more or less under control. And you mostly do. And so the searching of your early years do not give the impression of a confused drifting,
which doesn’t rule out that the artist as a young man didn’t painfully struggle with his path, his probing steps and gestures.

– There are mature artists who shrug off their beginnings as the folly of youth, as a time of confusion. Who lock that away and take it out of service. Dear Neo, you have no need of that. With you, all of that seems more like a successful metamorphosis – and in such stories of creation, the beginning is simply raw and unformed. But gradually, figures emerge that seem familiar to those of us who know the mature oeuvre, and we encounter them again. Your inventory, Neo, is really something that endures. It is a transforming evolution of your life’s work, from the beginnings. It is called “Bestand” because it endures. And see, it is good.