From 29th May 2021 on, the Graphics Foundation Neo Rauch presents an encounter of three artist generations living in Leipzig (Germany) in its latest group show: Hartwig Ebersbach, Neo Rauch and Stefan Guggisberg.

Hartwig Ebersbach, born in Zwickau (Germany) in 1940, completed his studies in painting under the mentoring of Professor Bernhard Heisig at the Academy of Fine Arts Leipzig from 1959 until 1964. The close relationship with Neo Rauch exists twofold: Hartwig Ebersbach not only belonged to the teaching generation during Neo Rauch’s studies in Leipzig but he was also a fellow student of the early deceased father Hanno Rauch. Hartwig Ebersbach’s oeuvre is marked by its expressive, predominately abstract work built on a distinctive strong and pastose color application.

Neo Rauch, born in Leipzig in 1960, studied in Professor Arno Rink’s class at the Academy of Fine Arts Leipzig from 1981 until 1986. He later became a master-class student under the supervision of Bernhard Heisig and finally held a professorship from 2005 until 2014 at the same arts academy. Neo Rauch especially gained national and international reputation through a prominent figurative picture language in his work. In the period of his teaching profession, he has mentored a new generation of painters and encouraged them to follow their own artistic inspirations and expressions.

In this context, the group show’s encounter is complemented by the artistic contribution of Stefan Guggisberg, born in Thun (Switzerland) in 1980. From 2005 until 2009, he studied photography and painting in the classes of Christopher Muller, Neo Rauch and Timm Rautert at the Academy of Fine Arts Leipzig and until 2012; he was a master-class student of Neo Rauch. Stefan Guggisberg dedicates himself to paper as a support medium on which he delicately removes several layers of paint to make numerous hidden forms and structures visible.

The exhibited works present similarities of the artists’ proficiencies and their classic teaching as well as their distinctions of artistic expressions. This enthralling correlation featuring a repertoire of diverse forms, colors, subjects and selected materials is what makes this exhibition so exceptional.

The exhibition is supported by the NORD/LB Kulturstiftung. 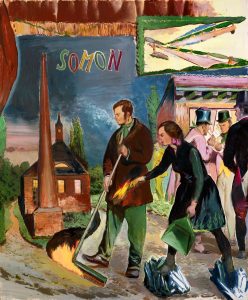 “Somon” is a large-scale work created in 2021 with oil on paper. Read backwards, the title leads to a term from ancient Greece: “Nomos” stood for a certain valid order. In today’s translation from Greek, “Nomos” denotes law, custom or convention.

In the upper collage-like area, the letters of the title can be seen, as well as a landscape detail that resembles a postcard. The painted stage curtain, often cited in art, blurs the transition between reality and image and opens the exhibition.

The background is represented by landscape and architecture. A present chimney refers to industry, while the building style and clothing might recall a scene from old England. The center of the painting shows a rather carefree-looking man and woman who appear to be using burning brooms, with the woman standing on ice-shaped crystals. To the right behind them, an averted group of three men in top hats and tails can be seen, one of whom is lighting a cigarette for his counterpart. Another man in the background blends into the surroundings so inconspicuously that the viewer does not notice him at first. Mysteriously, he observes the events in the foreground parallel to the viewer. Familiar protagonists can also be found in many other works, such as “Frei”, being also part of this exhibition.

In the painting, much tension is created by contrasts. Fire is juxtaposed with ice, man with nature, and buildings with the landscape. In addition, one sees contrasts of light and shadow, which modulate spatiality and physicality and create structures. The pictorial space is composed of numerous different layers. The choice of colors is generally quite varied, but rather muted, creating a somber suspenseful mood. The impressive sky in the background, painted in a dark blue, looks threatening. Its clouds could join together at any time to form a thunderstorm, whose lightning could set fire again. One thus recognizes four elements in the work: fire, ice, air and earth.

Many questions are raised, such as whether the burning broom itself is on fire or trying to extinguish it. Metaphorically, could something negative be swept out of the image? As the work opens the exhibition, there is also the question of whether everyday things should be swept out of the viewer’s mind to make room for an intense examination. One does not know, however, whether a fire is being set or fought for this purpose. This leaves a lot of room for one’s own interpretations.

This work is available as a poster. 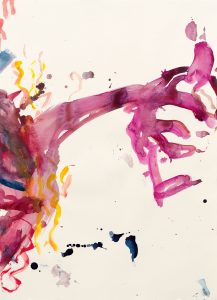 “Der Zorn Gottes” (approx. wrath of god), a twelve-part leporello, belongs to the multi-part series entitled “Das Geschehen” (approx. the event). In this work Hartwig Ebersbach (*1940 in Zwickau) turns to watercolor after many years of oil painting. It shows a rich palette of colors, applied with the familiar powerful, playful ease.

The space-filling leporello seems chronologically readable from left to right, but breaks mark especially the left half of the paperwork. Rather abstract forms leave the viewer wondering about the visible as well as the invisible. Where at first glance one expects no narration, nothing figurative, at second glance one or the other comes to the surface of consciousness – the devil’s claw, fire, figurative forces that wrestle, plead, turn back and forth.

According to Hartwig Eberbach’s narration, this work is dedicated to the following dream event: God is enraged, because his earthly representative, the pope, behaves reprehensibly, is unworthy of his position. The church, petrified, has betrayed its values. God and the devil have remained as lovers since time immemorial. Hartwig Ebersbach illustrates the loss of credibility, turbulent actions. Changes that are permeated by emotional, expressive and tense conditions. Thus, “Der Zorn Gottes” is an extremely exciting event on many different levels – formal, affective as well as in terms of content. 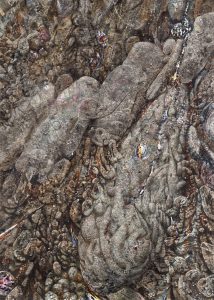 During his studies at the Academy of Fine Arts Leipzig in Germany, Stefan Guggisberg, born in Thun (CH) in 1980, developed his artistic position by rethinking and exhausting the bridge between new techniques and old traditions. Guggisberg’s applied method may be best located in-between today as he uses digital drawing tools as well as oil painting in his oeuvre.

This range traces back from his academic background: After completing his first graphic training in Switzerland, he changed from photography to painting at the Academy of Fine Arts Leipzig. In Neo Rauch’s class, former head of the painting class, Stefan Guggisberg dealt with painting for the first time, subsequently withdrew from classic traditions of painting and developed his matchless technique especially since he rather works with electric erasers than brushes or scrapers.

After covering the paper sheet with oil paint, he intuitively works with an electric eraser on the surface. Some layers of paint are removed and some layers are added until unique forms come into being. The seemingly non-representational shapes remind of lively, vibrant and organic forms accompanied with opalescent reflections thusly emitting a mystic appearance of the painting.

This mysticism is fortified by the large-scaled work’s title “Sphere” (240 x 170 cm) which is suggestive of an ambient tangible or intangible space. It is open to the viewer, however, in what way these apparent deliquescent shapes and colors result in deduced figures: be it the sea floor glistening through crystalline water or alpine rock formations pervaded with minerals; patterns of cloth or even a microscopic enlarged sample image.

This free interpretative openness is an approach endorsed by Guggisberg as his main intention is less to depict reality rather than processes. He is a so-called seeker of figures in which he finds pleasure during the creative work. In 2010, he already demonstrated this approach at Neo Rauch’s master-class-student exhibition during the State Garden Show in Aschersleben, Germany.

This image is available as poster.